All Mitsuoka le Seyde For Sale in the UK Via Algys Autos.
The UK Premier Importer supplying direct from Japan for over 20 years!

Our Mitsuoka le Seyde are all imported to order direct from Japan to the UK. Contact Algys Autos for details via Email.

Mitsuoka is a small Japanese automobile company which builds modern Japanese cars to resemble British vehicles of the 1950s and 1960s. It is primarily a coachbulider, taking production cars like the Nissan Micra and replacing the bodywork with its own custom designs. It has also produced a concept sports car, the Orochi. Mitsuoka Motors is also the principal distributor of retro-classic roadster in Japan. 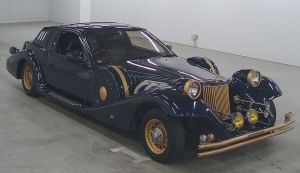 The Le seyde is production from 1990 / 1996 although later registered cars can be found. Made in limited numbers the first 500 produced sold in no time at all and so another few batches were produced. Produced in various engines the most popular is the 1800cc Nissan Engine although 4700cc engines were fitted to a few!

The cars are incredibly distinct and their uniqueness makes them very desirable and collectable.

Algys Autos Ltd have imported several Mitsuoka Le Seyde into the UK, prices in general are around the £14,000 mark on the road UK. This low price is achieved via Algys Autos. Mitsuoka le Seyde For Sale. 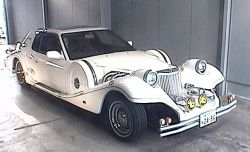 Seyde circulating for sale within the UK. Most UK traders buy from the used UK market, generally these cars are tired and have been subjected to the cruel and harsh winter roads and conditions. Ask to see the Japanese auction sheet and proof they imported it from Japan…..if they can’t or won’t provide it, turn around, walk away and come to the experts.

Contact us via email and ask for details on Mitsuoka le Seyde For Sale in Japan for import into the UK. 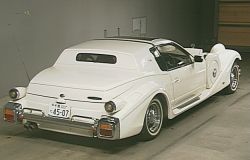 The Import Scheme was a brain-child of Algys Autos over 20 years ago and many have tried to copy it with little success. The other traders even refer to the idea as the Import Scheme (conveniently dropping the ‘Algys Autos’ of course). The Import Scheme is where Algys Autos allows you to bring the selected Mitsuoka le Seyde into the UK as a ‘Private Importation’ and thus saves £1000’s. We buy any model to your detailed requirements under this scheme via our Garages in Japan.

Algys Autos Ltd are suppliers of all models to the trade, you too now have the opportunity to purchase at Japan trade prices! We consistently offer the very best value for money in the UK! Mitsuoka le Seyde For Sale.

The Viewt is a modification of the Nissan March/Micra, intended to resemble the Jaguar Mark 2. It, along with Mitsuoka’s later Galue, encouraged larger Japanese manufacturers to produce retro-styled versions of their own cars.

The car that is distinctly modellled on the Mark 2 Jaguar The first Viewt, introduced in January 1993, was produced on the basis of the K11 March. The

March’s hatchback was replaced by a fixed rear window and rounded boot, and the front grille and headlamp assembly was replaced by one closely resembling that of the Jaguar Mark II. In standard form the interior was much the same as the March’s, but leather seats and wood trim could be added at extra cost.

The Viewt shared its 1.0- and 1.3-litre engines with the March. It was originally available with manual or automatic transmissions; later more luxurious editions were automatic-only.

Changes to the March were usually echoed in the Viewt; for example, when the March received a new dashboard the Viewt had it too, with a new wood kit. After the March convertible was introduced in 1997, Mitsuoka developed a Viewt convertible which used the Jaguar-style front but had a unique built-out rear.
Like the March, the new Viewt is available with 1.2-, 1.4- and 1.5-litre engines, with automatic or manual transmissions. The interior resembles the March’s; leather seats are optionally available. The 12SR version uses some of the March 12SR’s interior decoration, such as carbon fibre inserts on the dashboard.

If you contact us for details of Mitsuoka Le Seyde available from Japan you will also get the opportunity to see full details and photos showing the Mitsuoka le Seyde of your choice in the comfort of your own home to see time and again. These is NO obligation to our email service, advice or the YouTube videos.

Algys Autos Ltd is by FAR the best UK value Mitsuoka le Seyde available!! How? We have garages in Japan and UK. NO middle-men. We have the FULL infrastructure in place and we are not greedy. £350 profit per car SIMPLE. Try asking another dealer how much profit he’s made on a car!